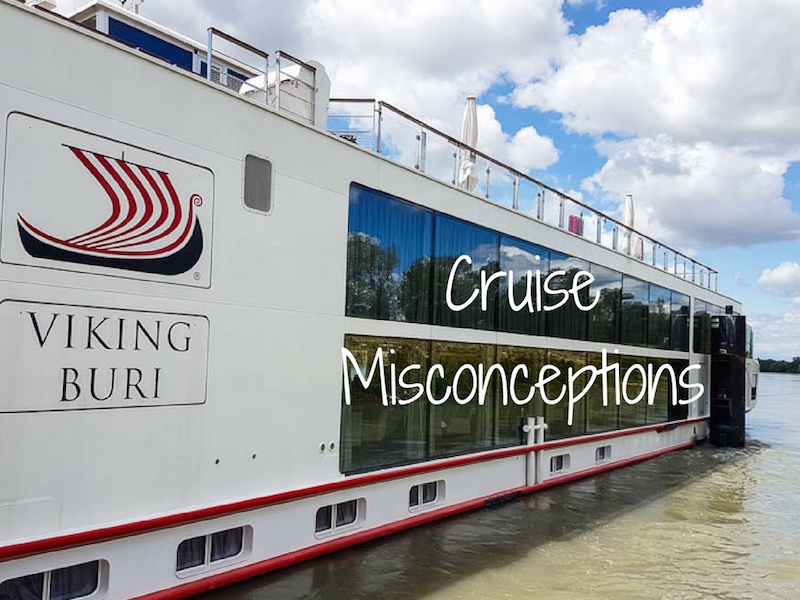 Breaking Down 5 Cruise Misconceptions on a European River Cruise

We’ve always prided ourselves on the fact that we’ve never been on a cruise. Technically, we can’t even make this claim due to a not so fab two night Yangtze River cruise we took in China back in 2009. But, I don’t think it counts. I mean a real cruise. One with a cruise director, buffet meals, and pre-arranged activities, on a boat with a bunch of other people. I’ve always stuck my nose up a bit at cruise goers, that was until our recent French river cruise experience.

Yes, Viking River Cruises hosted us on this experience. And I’m glad they did. I never would have thought of doing this type of river cruise otherwise. We not only had a great experience, but it certainly dispelled some of the misconceptions I had about cruising in general. 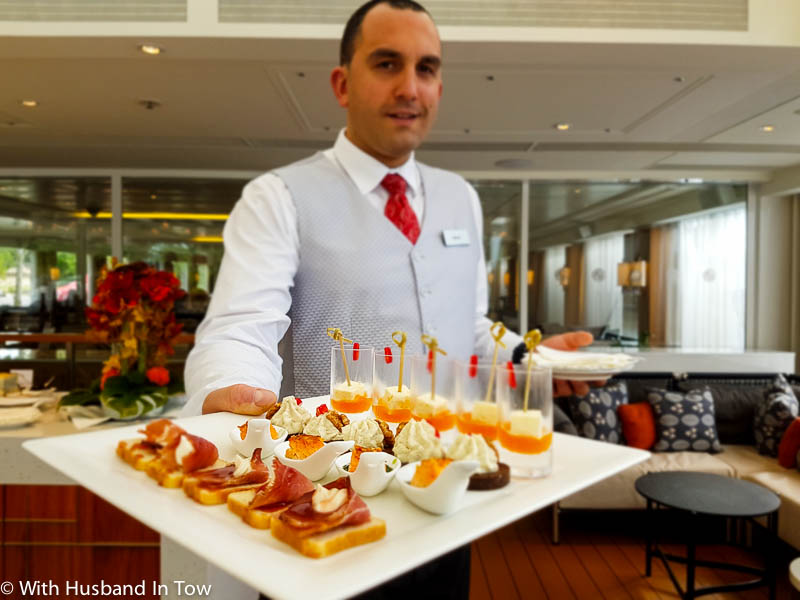 Close your eyes and say the words “cruise ship” and what images pop into your head? For me, it’s always been large cruise ships, the size of a small city, where it’s nearly impossible to find a lounge chair near the pool. Where I would be one of a thousand people clamoring for a server’s attention at dinner.

I knew this wouldn’t be our experience on a European river cruise. First, the rivers can’t hold ships that big. There were less than a hundred staterooms on our Viking Buri longship. On our cruise, from Avignon to Lyon, I believe there were about 150 passengers on board. That meant there were always seats available at dinner, or in the lounge. Even when many of the passengers were in one place, for example during our evening briefings, it never felt crowded at all.

I also assumed that those cruise ships would be very impersonal. But, the crew on the Viking Buri were fabulous. They knew many of us by name, or minimally, based on what we drank. By the end of the week, Robert, one of our servers in the restaurant knew that lunch time meant rosé, and that it was hard for me to say no to dessert. The bartender, Boris, always knew I started my cocktails in the evening with an Aperol Spritz. The crew was so unbelievably personable and welcoming, more so than any hotel I’ve ever stayed at. 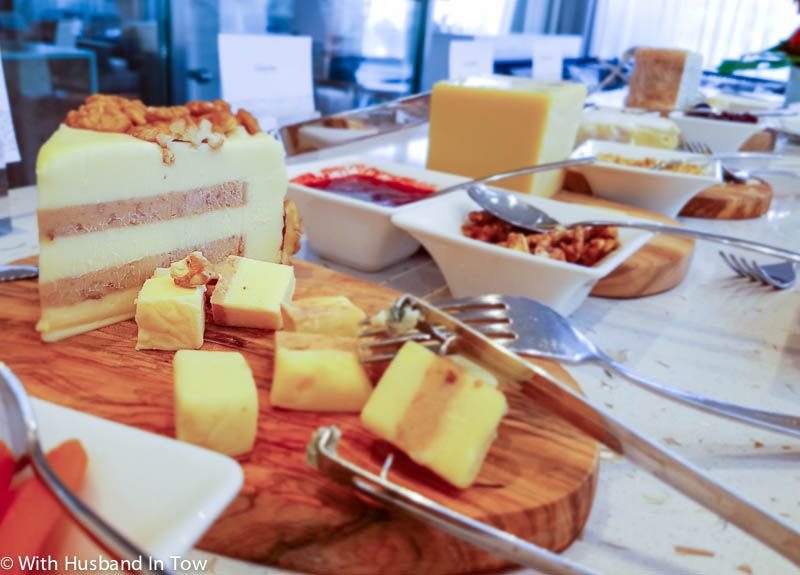 For me, this presents almost a nightmarish scenario aboard a cruise ship. Long lines, cold food, all of which looks manhandled and unappetizing. Imagine spending a week when all of your meals involved elbowing people away to grab the last remnant of a lemon meringue pie.

But, our French river cruise was intended to cater to food lovers. In fact, the entire cruise around Provence and the Rhone River Valley focused on food and wine. Menus always had locally inspired dishes. And, the cultural curriculum included demonstrations on how to make chocolate fondant, a presentation on French cheeses, and a galley tour. 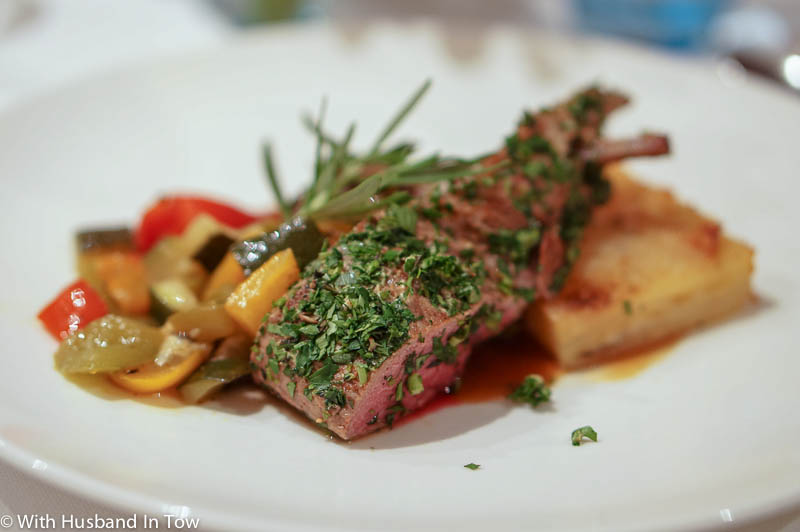 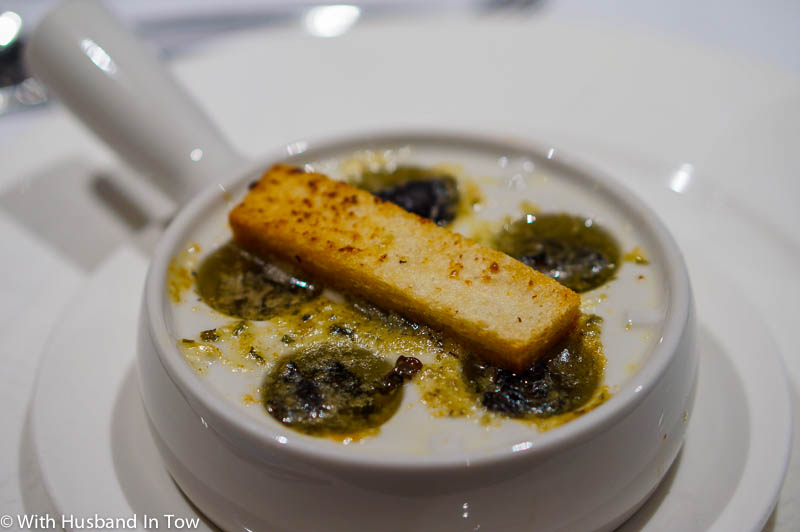 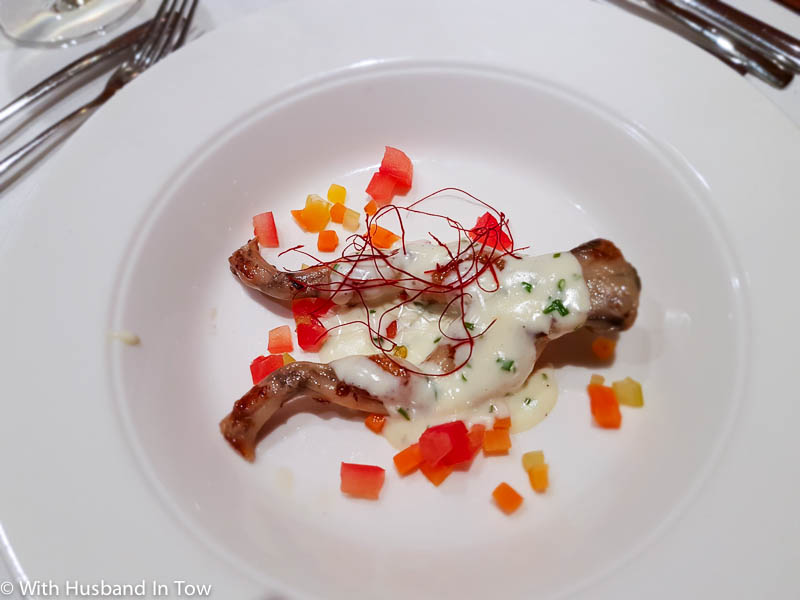 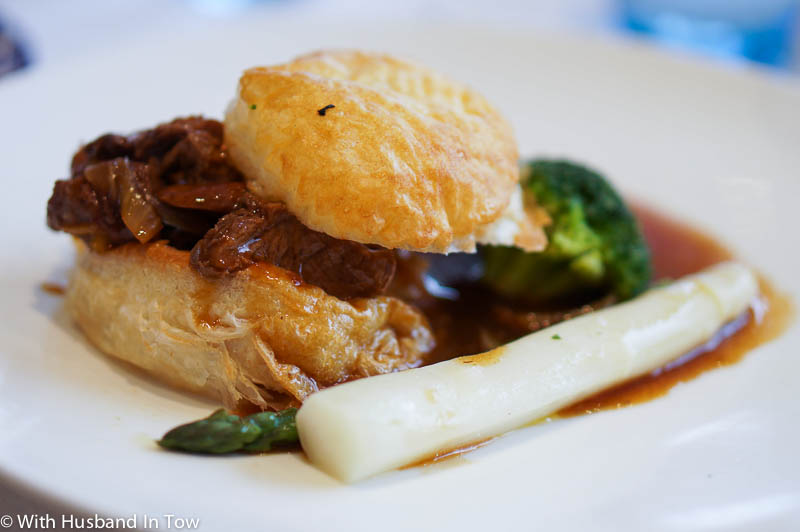 Although a casual buffet option was available for three meals a day, the presentation of the buffet was impressive. Food was well prepared, and well stocked. Service was above and beyond. Breakfast and lunch in the main restaurant offered some buffet options as well as an a la carte menu. The lunch items changed daily. 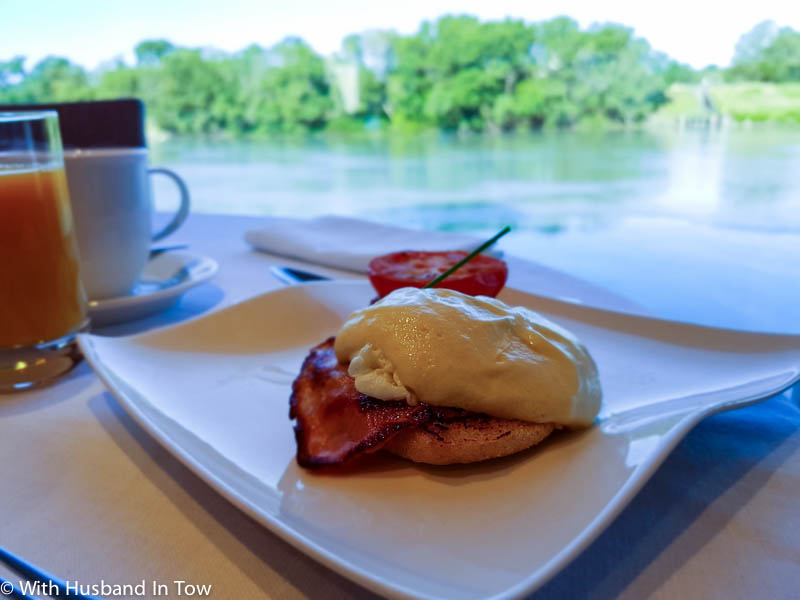 Dinner at the restaurant was always a la carte, and focused on international and local dishes. We ate escargot and frogs legs and chateaubriand, all paired with French wines. Although our fellow diners agreed that a few of the menu items over the week were “misses,” overall the dinners were fabulous. Honestly, they were way better than expected.

One afternoon, Chef Peter provided a galley tour, which put everything in perspective. The galley, or kitchen, is tiny. There are less than ten people in the kitchen, preparing dinners for 150 people, who are all sitting down at one time, to eat a three course meal. More impressive, for safety reasons, all of the cooking has to be electric. Not a single fire burning in the galley. When I learned this, I became even more impressed with the meals Viking prepared. 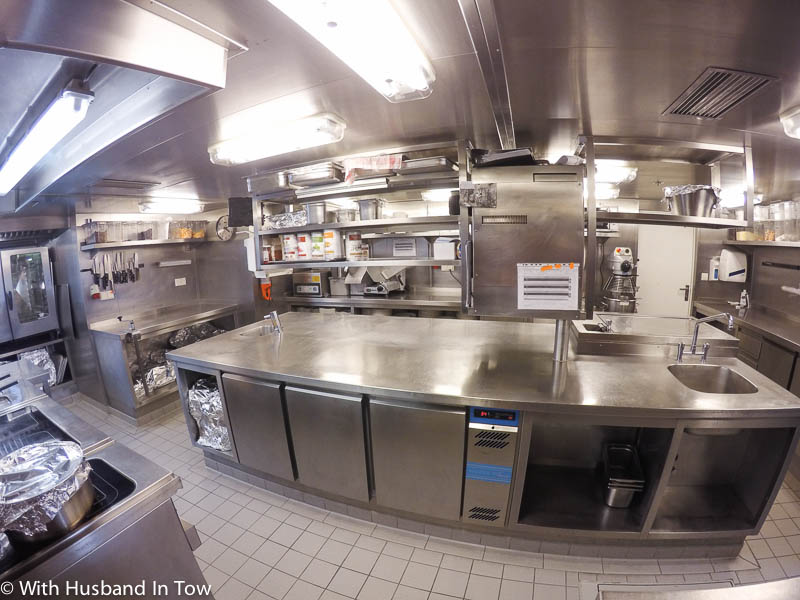 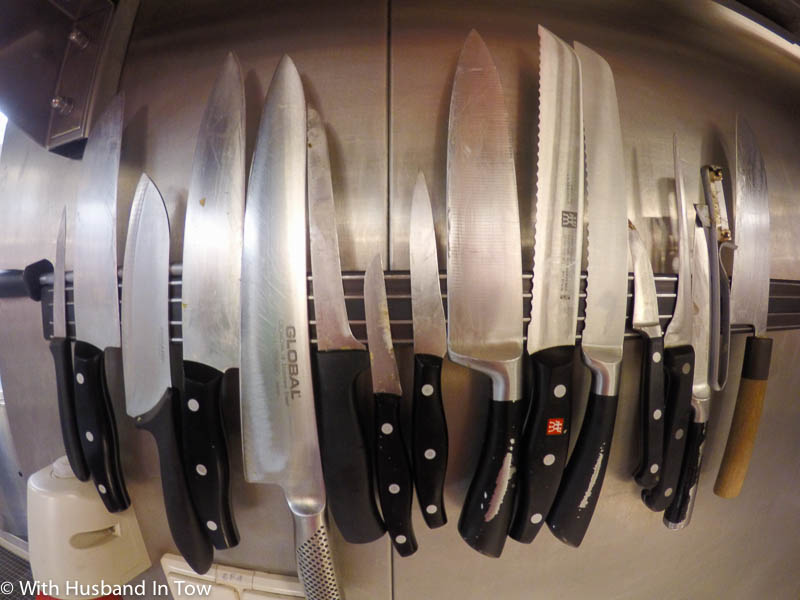 Moreover, the folks on the Viking French river cruise did a great job of looking after guests with food allergies and other issues. We were traveling with a friend who was recently diagnosed with a disease that has altered everything he ingests. The Maitre d’, Imre, found our friend at every meal to ensure he was taken care of. Imre went so far as to go ashore and buy coconut milk, so our friend wasn’t stuck with soy. The attention was so good that at times our friend wanted to “cheat” a little, but didn’t want to disappoint Imre. It was amazing to watch. 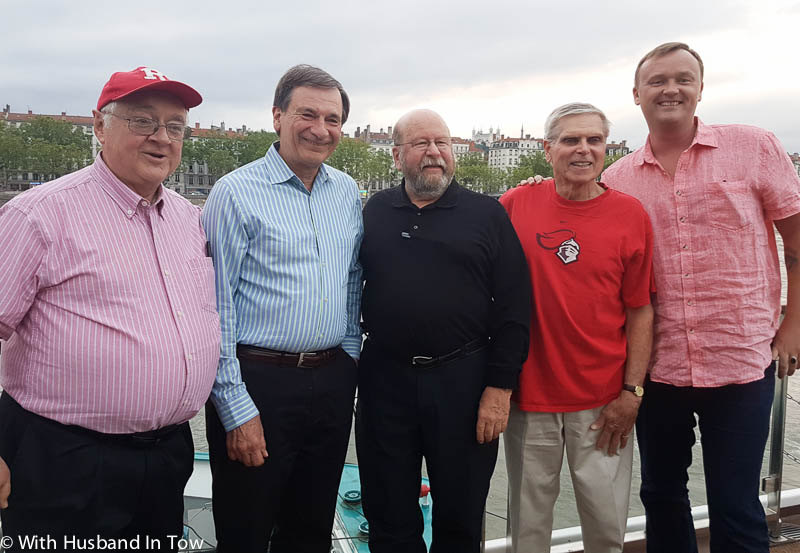 I’ve always wondered whether I could enjoy a cruise if we didn’t fit the demographic of the cruise ship, generally misconstrued to be limited to older people. Our European river cruise was just such a test. Now, I should note that Eric and I tend to fit in very well with retirees. We always end up hanging with retirees at resorts or hotels. Some of our closest friends when living in Bali were in their sixties. Perhaps that is because we don’t stay up late partying and we value our sleep.

That said, most of the people aboard our Viking River Cruise were older than us. It is not only the general age of cruise ship passengers, but it is because Viking caters to a more affluent audience. It is more of a luxury cruise experience than a Carnival cruise around the Caribbean. Viking’s focus on service, and attention to detail, mean a higher price tag. A higher price tag means a more affluent demographic. There were no drunk twenty somethings partying until 4 am. Something I appreciated.

Who was aboard? Some really lovely people, who enjoy traveling, and drinking wine. We actually met four gentlemen, who travel together, with their wives, every year. They were fraternity brothers at our alma matter, Rutgers University. Now, they are professors and lawyers. We had a lot of fun on tours with them, getting to know them. Eric even sang the school song with them on our last night.

So, were we younger than most passengers? Yes. Did we care? Absolutely not. 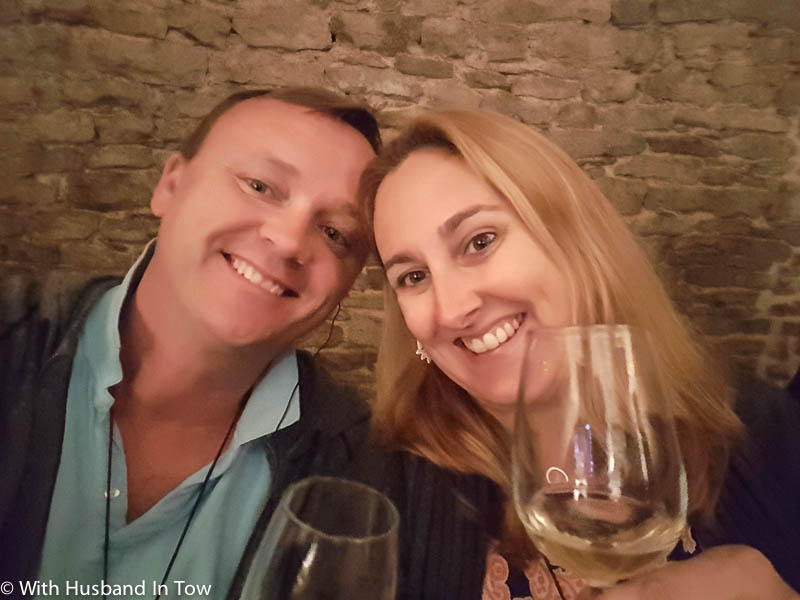 I am generally not a fan of group tours because I don’t like being on a tight schedule. I value my free time. I like to nap. I want to ensure I have time to write, or to work, or to just sit and chat with someone. I was a little concerned that cruise travel would be too scheduled. Too many ports of call, on board activities, and excursions.

A crew member placed a copy of the Viking Daily in our room each night. If I attended each and every activity on the daily schedule, I would be run ragged. There were loads of activities. And, I could have done them all. Or, I could have passed on every one. Although lunch and dinner times were pretty set, everything else was up to us. I felt no pressure to do activities I didn’t want to do. And, one afternoon when it was raining out and I was tired, we laid in bed and watched Downtown Abbey on our cabin’s TV.

During our French river cruise, there were about ten optional excursions for an extra charge, generally between 50 and 120 Euros per person. We did only three of those excursions. We traveled to Chateuaneuf-du-Pape for a wine tasting.

We learned to cook French pastries in Lyon.

We visited a goat cheese farm and learned about truffle hunting.

Of the fifteen or so excursions that were included in the price of the cruise, we did two. We went to Beaujolais for a wine tasting, and took a walking tour in the one of the villages. A few days we had nothing scheduled at all. Certainly, we were not too scheduled, and I felt that I could relax when I wanted to. 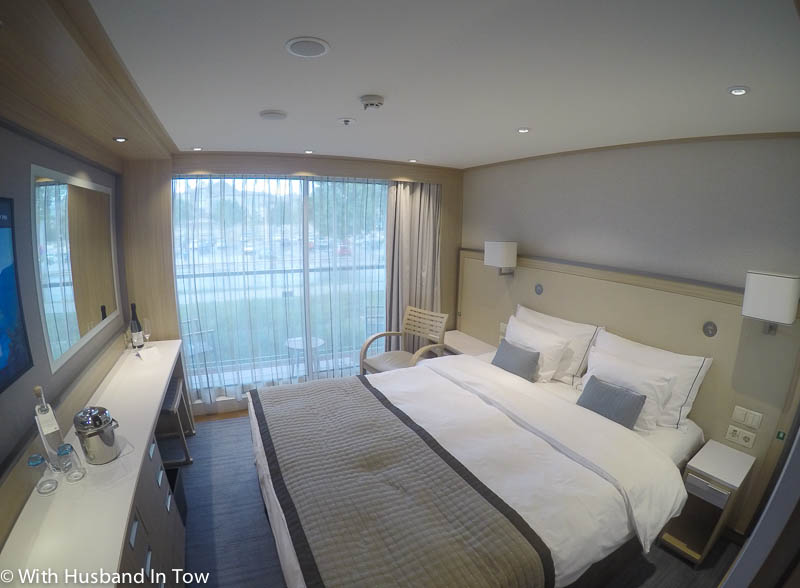 Eric is almost a giant. He doesn’t fit anywhere. It’s one of the reasons why we’ve never booked a cruise. I didn’t want to feel cramped in a tiny cabin with a giant. For that ill fated Chinese river cruise years ago, we had two tiny single beds, up against the wall, and a bathroom that was virtually unusable. Add to this the fact that I’ve recently developed a minor case of claustrophobia, and I was nervous about being stuck in a small cabin space for a week. 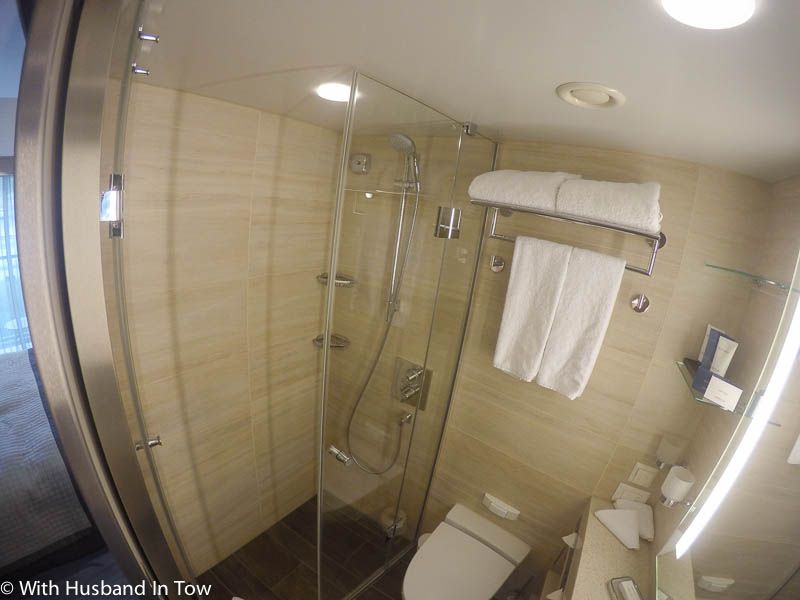 On our Viking Buri ship, we had a Veranda Stateroom. We had floor to ceiling windows, and a balcony. We had a queen sized bed and a shower that Eric could fit in. The stateroom was about the same size as a typical hotel room in Hong Kong, cozy, but functional, and not in the least bit claustrophobia inducing.

Also, because we were in one place for a full seven nights, which almost never happens when we travel, we could completely unpack, and store our suit cases under the bed. I never felt too cramped, and was happy to curl up in bed while we were cruising, open the curtains, and watch the French countryside go by.

Check out our video for more details on our French river cruise:

We were guests of Viking River Cruises for our French river cruise, but all opinions, and yummy sounds, are as always, my own. Our Veranda Stateroom aboard the Viking Longship Buri starts at $1,999 per person.